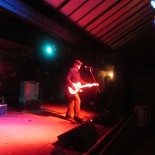 Over at Dangerous Minds, Nail O’Conghaile has a post about the Emily White–David Lowery-Free Music-Piracy conversation that rolled across social media a couple of weeks ago.   Arguing in support of Lowery’s position, O”Conghaile asks “why does the onus always seem to be on the creator of art to accept that their product should be free, rather than on the consumer to analyze the impact of their actions on the quality of art?” and predicts “that we’ll never see another David Bowie or another Prince or another Beatles again. Not because talents such as there’s aren’t out there, but because the financial system that allowed those talents to flourish, and that in turn made the consumers used to obtaining a high level of art on a regular basis, are gone.”   I think that’s a good question to ask right now, and I like the fact that the prediction refuses to unwrap great popular music from its economic structures.

In between those two points, O’Conghaile touched on the role of what I would call the rhetoric of authenticity in justifying piracy.  I’ve been thinking about this a lot lately, and I’ll have more to say about it later, but for now, I left this in comments:

“One day I would dearly love to be able to live off the money generated by my music. So, am I somehow wrong (or perhaps even evil) because I want this?

Some would say that I am, that somehow I am not a “true” artist because I have brought money into the equation and have aspirations to become “professional.” (How exactly does being considered a professional in your field invalidate what you do?!) To these folks I must stay clean and unsullied by money at all times, lest I become some kind of artistic “whore.” (And I LOVE getting called a “whore,” especially by people who can’t stop themselves downloading music like a junkie can’t say no to a fix.)
Well, newsflash: your romantic notion doesn’t pay my rent.”

One of the things that I think feeds into this is the idea that the genres that have occupied the center of the pop universe over the past 4 decades or so, are somehow themselves transcendent of or separate from the marketplace. its an idea that got attached to rock at pretty much the point where it moved into that center, and its been a defining characteristic ever since. there are some exceptions, but the dominant genres between 1965 and today, rock and hip-hop in their various variations, posit themselves as what I call “unpopular popular music” or “unpop,” music distinguished in the market by supposedly resisting those market forces.
In some ways its a by product of what pop music does, the way it makes you feel freed from your everyday, workaday, shackles. But that feeling has always been an illusion, leveraged by musicians and record companies (I’m not equating the two, just pointing out a confluence of interests) to keep people buying music. Now, its being leveraged by people who run file sharing sites and make money off ad revenues, and pay even less (nothing) to the people who make the music.
Given the choice, and we do have one, I’d rather pay the record labels and the musicians. Even the crookedest record labels gave artists a bigger cut than The Pirate Bay.
A lot of folks on here keep insisting that somehow this current state of affairs is more democratic, is better for a wider variety of artists, for people unlikely to have been signed in the first place. Well, this could be true. But it doesn’t have to be, and it won’t automatically turn out that way. The talented and quirky ukulele player will likely have to find a way to support her art or get burned out. if you go and look for ways to pay her for the music you like, she can keep doing it longer. Or, you can throw up your hands and watch the market eat her alive. its really up to each of us.
I’ve beaten this analogy to death on this thread, but I’ll hit it one more time. People decide to pay more for fair trade coffee, or to shop locally, or to eat organic, or to not wear sweatshop clothing. These kinds of choices have even become kind of hip, often with the same folks who think that driving up the ad revenues for a file-sharing site is more rebellious and righteous than buying music from an artist. We can make it hip to buy music. its not about putting the genie back in the bottle, its about asking for what you really want to happen, even if it costs a little cash.

This entry was posted on July 6, 2012 by Eric D. Johnson in Conversations.